These are called operational dimensions because they are the dimensions of our human experience at which different operations function;

1. The physical operations (dimension 1 only)

2. The mental (cognitive) operations (dimensions 1 & 2 together)

4. The spiritual/religious operations (dimensions 1,2,3 & 4 together)

If you deal with an issue at just the first dimension (physical) say a bodily wound, healing may come but only to the physical wound.

If you deal with that same bodily wound at the second dimension (mental), you not only attend to the physical wound but you also heal the underlying ‘thinking’/cognitive belief systems that led to the injury in the first place – “I’m hopeless”, “nobody loves me”, leads to feeling poorly about oneself, leads to lack of consciousness around behaviour and motivation, leads to physical clumsiness, leads to injury to prove my hopelessness and have others fill the emptiness of “love” in my life – “bang” – I’ve hurt myself.

If you deal with the same issue but take it to the third dimension (moral) you begin to become conscious of personal responsibility in the mental process behind the physical act of injury.

The fourth dimension spiritual/religious informs the previous three. So the deepest healing occurs here because it engages all dimensions and attends to the underlying causal reasons at the level of personal spirit/soul in the context of the Sacred Spirit of Love.

The 12 steps of the Alcoholic’s Anonymous program is aware of this connection. For the addiction to be overcome one must first call on their “Higher Power”, however an individual understands this.

The problem with the prevailing western medical model is it addresses healing at the first dimension only. (Unless your lucky enough to have a GP who can see the value of the other dimensions). So doctors may medicate the body without considering the underlying causes. And one may ask, what’s the value of that if the problem is in the mind or spirit. The model is built on a science that does not generally acknowledge the connection between the higher dimensions (3 and 4) and the lower (1 and 2).

Likewise if we minimise what belongs essentially at dimension 4, to dimension 2, then ‘they’ reduce mystery to concepts, rational understandings, doctrinal formulations – our religious experience is always more than this. A good example of this is the re-wording of the liturgy – if I react to the phrasing and wording I may be reacting from a lower dimension and in the end I’ve really diminished my dimension 4 openness to God’s ability to speak through anything. On the contrary if I live my religious life at dimension 4 then forms, words, doctrines, and moral precepts have their place but can be held more lightly and with a healthy indifference, in the broader context of a God who knows no boundaries.

The Seven Principles of Man

The Seven Principles of Man is a book written by Annie Besant (1847-1933) second president and one of the main authors of the Theosophical Society. It is not Christian but rather Hindu and Spiritualist in philosophical foundations.

The writings reflect the experience of one Madame Helena Petrovna Blavatsky, (first president of the Theosophical Society), who among other things claimed to have demonstrated physical and mental psychic feats which included levitation, clairvoyance, out-of-body projection, telepathy, clairaudience and materialization, though in general, her interests were more in the area of ‘theory’ and ‘laws’ rather than demonstration. She was a controversial figure, with some questioning her integrity.

Anyhow, I mention this little book simply because the schema in it speaks to the operational dimensions mentioned above, as it speaks to the different levels we experience in ourselves. I can’t reproduce the whole book, but I attach a table or two of interest. The terminology finds its roots in Sanskrit and so may be unfamiliar – you can always Google more if you wish. 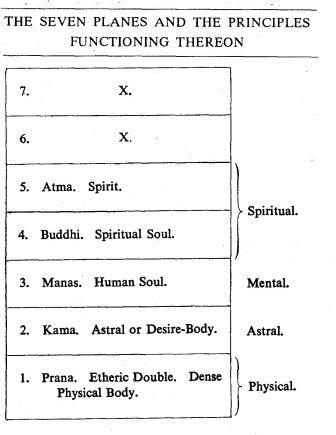 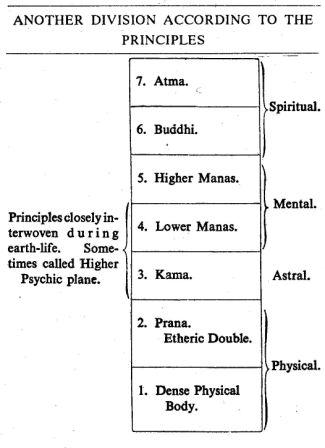 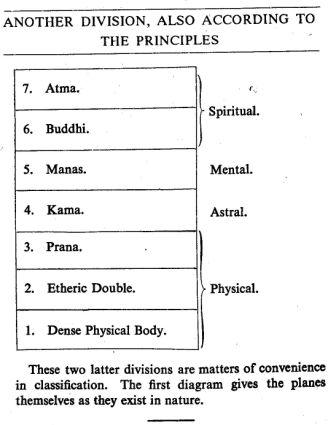