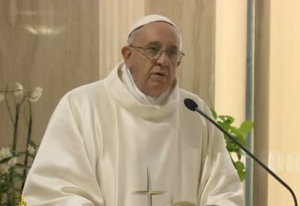 “I ask you to ensure that humanity is served by wealth and not ruled by it.”

Pope Francis has sent a message to the World Economic Forum in Davos, delivered by Cardinal Peter Turkson, president of the Pontifical Council for Justice and Peace, on Jan. 21.

I am very grateful for your kind invitation to address the annual meeting of the World Economic Forum, which, as is customary, will be held at Davos-Klosters at the end of this month. Trusting that the meeting will provide an occasion for deeper reflection on the causes of the economic crisis affecting the world these past few years, I would like to offer some considerations in the hope that they might enrich the discussions of the Forum and make a useful contribution to its important work.

Ours is a time of notable changes and significant progress in different areas which have important consequences for the life of humanity. In fact, “we must praise the steps being taken to improve people’s welfare in areas such as health care, education and communications” (Evangelii Gaudium, 52), in addition to many other areas of human activity, and we must recognize the fundamental role that modern business activity has had in bringing about these changes, by stimulating and developing the immense resources of human intelligence. Nonetheless, the successes which have been achieved, even if they have reduced poverty for a great number of people, often have led to a widespread social exclusion. Indeed, the majority of the men and women of our time still continue to experience daily insecurity, often with dramatic consequences.

In the context of your meeting, I wish to emphasize the importance that the various political and economic sectors have in promoting an inclusive approach which takes into consideration the dignity of every human person and the common good. I am referring to a concern that ought to shape every political and economic decision, but which at times seems to be little more than an afterthought. Those working in these sectors have a precise responsibility towards others, particularly those who are most frail, weak and vulnerable. It is intolerable that thousands of people continue to die every day from hunger, even though substantial quantities of food are available, and often simply wasted. Likewise, we cannot but be moved by the many refugees seeking minimally dignified living conditions, who not only fail to find hospitality, but often, tragically, perish in moving from place to place. I know that these words are forceful, even dramatic, but they seek both to affirm and to challenge the ability of this assembly to make a difference. In fact, those who have demonstrated their aptitude for being innovative and for improving the lives of many people by their ingenuity and professional expertise can further contribute by putting their skills at the service of those who are still living in dire poverty.

What is needed, then, is a renewed, profound and broadened sense of responsibility on the part of all. “Business is – in fact – a vocation, and a noble vocation, provided that those engaged in it see themselves challenged by a greater meaning in life” (Evangelii Gaudium, 203). Such men and women are able to serve more effectively the common good and to make the goods of this world more accessible to all. Nevertheless, the growth of equality demands something more than economic growth, even though it presupposes it. It demands first of all “a transcendent vision of the person” (Benedict XVI, Caritas in Veritate, 11), because “without the perspective of eternal life, human progress in this world is denied breathing-space” (ibid.). It also calls for decisions, mechanisms and processes directed to a better distribution of wealth, the creation of sources of employment and an integral promotion of the poor which goes beyond a simple welfare mentality.

I am convinced that from such an openness to the transcendent a new political and business mentality can take shape, one capable of guiding all economic and financial activity within the horizon of an ethical approach which is truly humane. The international business community can count on many men and women of great personal honesty and integrity, whose work is inspired and guided by high ideals of fairness, generosity and concern for the authentic development of the human family. I urge you to draw upon these great human and moral resources and to take up this challenge with determination and far-sightedness. Without ignoring, naturally, the specific scientific and professional requirements of every context, I ask you to ensure that humanity is served by wealth and not ruled by it.

I hope that you may see in these brief words a sign of my pastoral concern and a constructive contribution to help your activities to be ever more noble and fruitful. I renew my best wishes for a successful meeting, as I invoke divine blessings on you and the. participants of the Forum, as well as on your families and all your work.